Happy Valentine’s Day! This year we celebrated with brunch (again)! 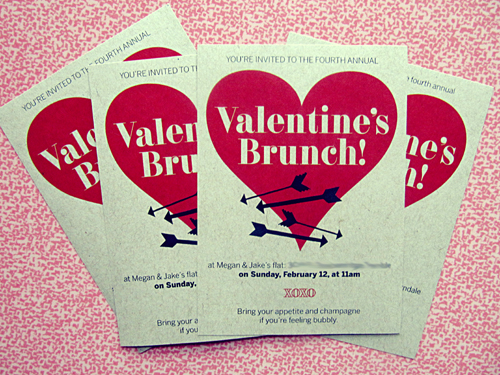 The flat is currently covered in pink, red, and gold. There are buntings, fringe, and glitter everywhere. I’m pretty sure it’s on my face right now. 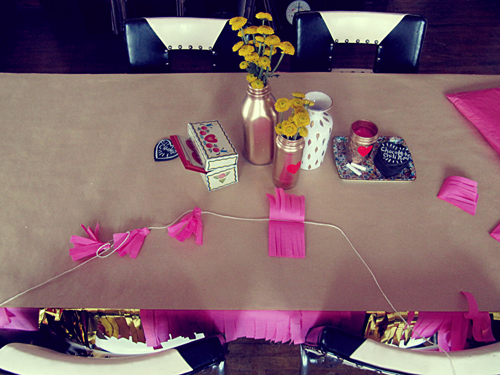 I was super into painting things gold and fringe, this year. I even gave the table a fringe-y skirt since the craft paper wasn’t wide enough to cover the whole thing. (Lookin’ good, table!) Eventually I put some chili chocolate lollipops in that little jar. They were spicy thanks to the hefty amount of chipotle smoked peppers I mixed into the chocolate. 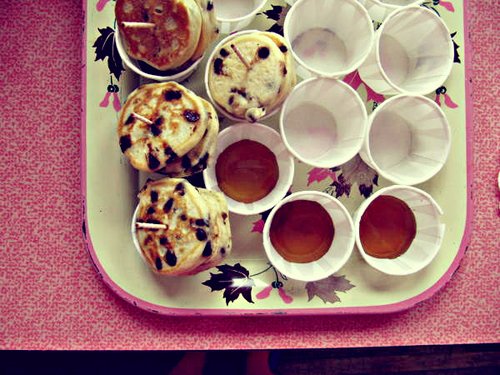 I made mini chocolate chip pancakes with their own little cups of maple syrup for easy dunking. I kept eating them because it was far too easy to walk around eating pancakes. 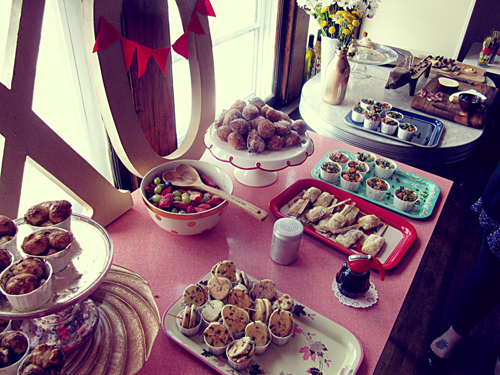 I bought a really big “X” and “O” to keep it real on the food table. Even the “O” got a bunting. I should probably buy stock in felt before next year. 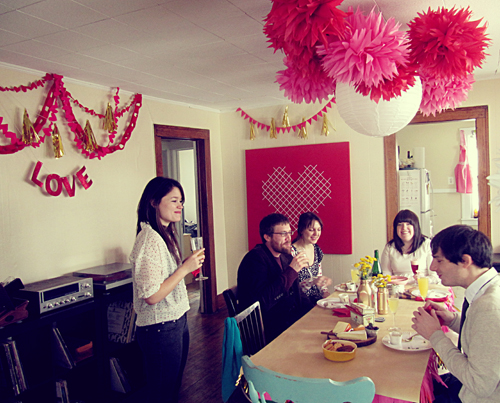 Cindy let me borrow her craft table for us to eat at! And two chairs even! She’s the best! She even helped me find the best plates ever. It was super-fun having her and her hubs at the party. 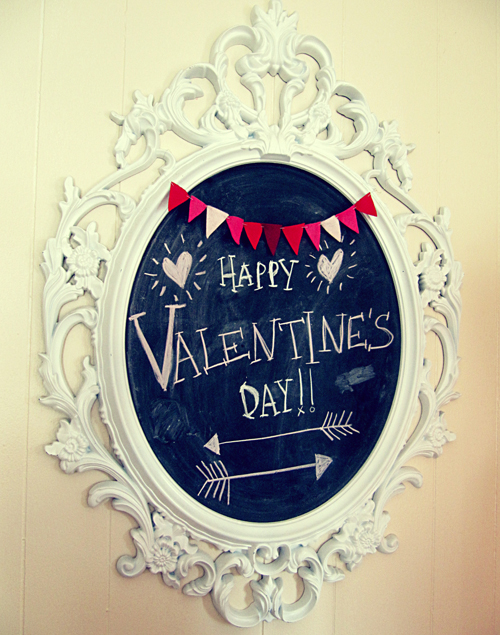 I decorated our chalkboard for the festivities. I’m a smudgy chalk-user. 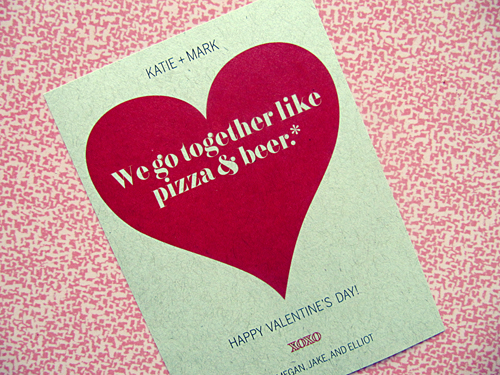 I passed out Valentine’s this year like the one up there. I made that one for my BFF because her and I get pizza and beer together a lot. I kept the valentines in a recipe box on the table until everyone was there for me to pass them out. 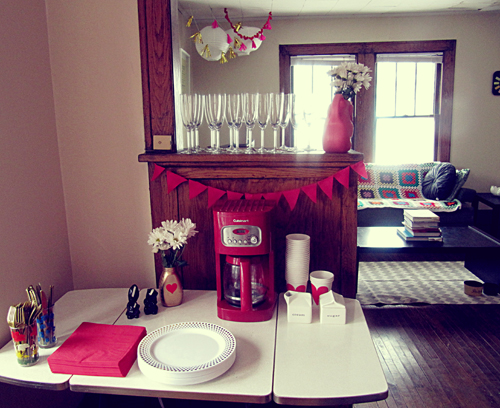 Coffee is super important at brunchparties. Almost as important as champagne, but not quite. 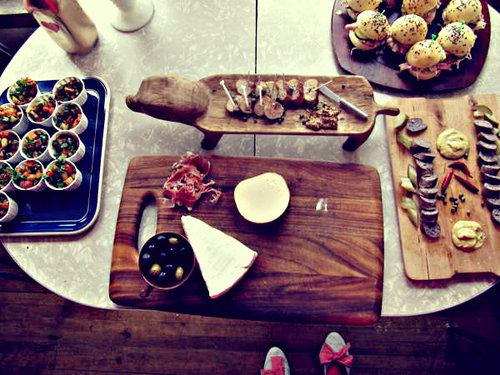 Jake roasted potatoes again this year. And he made some tasty sausages! He made one with malbec, garlic and rosemary, a boudin blanc, and a breakfast sausage with sage, ginger and coriander. He even cured and smoked a picnic ham for those Cuban sandwiches in the back there. I made the light brioche buns to hold the ham along with garlic mustard, pickles, and manchego cheese. 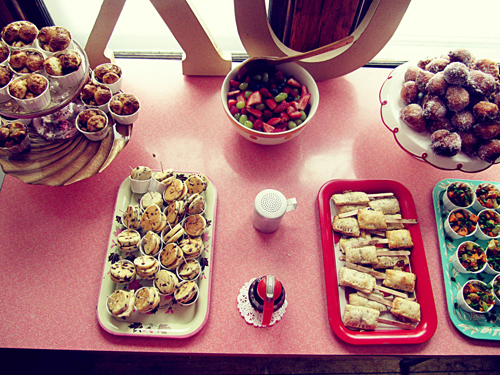 See those sugary donuts on the red and white cake stand? Those are Skrovaires! They are a Romanian donut that I grew up eating. It’s a recipe from my great grandma and passed on to my mom and then to me! (I’m posting the recipe soon!)

Monkey Bread Minis totally happened again. And then I also made brie and jam on a stick via this recipe. It worked out just perfectly because I could totally assemble both of those guys the night before and have them ready to bake in the morning. 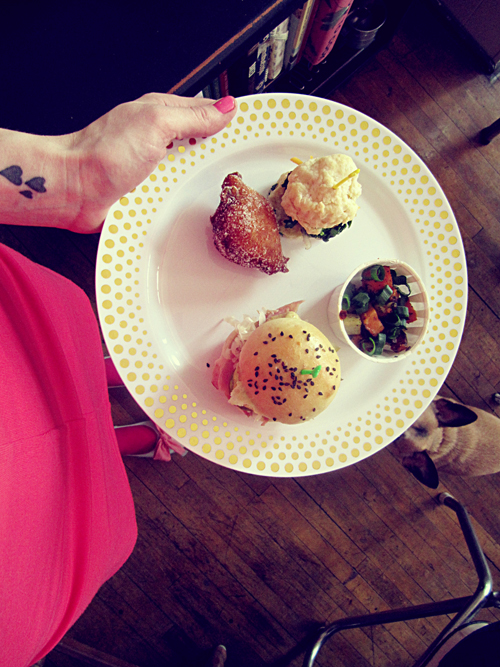 On my plate, I have a skrovaire, sausage biscuit, roasted potatoes, and a mini cuban. Just one plate of many. Elliot was super-jealous of all that tasty food, but don’t worry, he got special pup cookies and lots of blueberries. 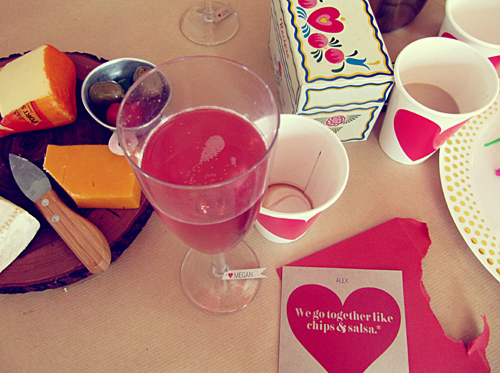 One of my friends brought pink champagne. It was a Valentine’s miracle! Prettiest drink ever.

Oh, and I made little drink tags like the one up there. I printed them off, cut them into little banners, and then attached them to the glasses using floral wire. I’m going to be honest here and say that I still accidentally drank out of other people’s glasses. Oops! 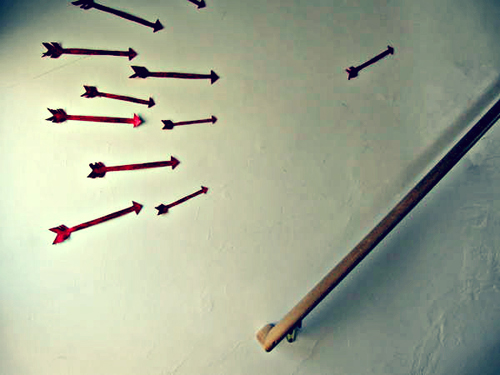 Oh yeah! I made glitter covered arrows for on the stairwell leading up to our apartment. Just in case anyone got lost. 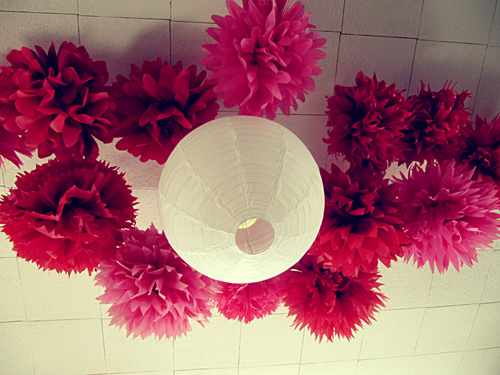 I made these pom-poms again this year. They’re just too fun to make! And can you believe I got to keep that giant heart cross-stitch?! I’m super excited that Jessica gave it to me after our photo shoot for Bride! 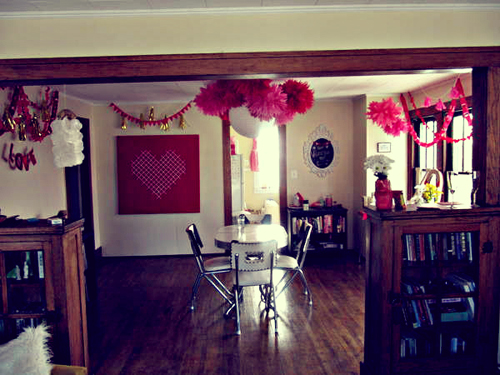 This last photo is post-party. I miss the fun already! I’ll probably leave the decorations up for awhile.

Basically, I just can’t wait for next year! I’m glad that this year I fried something and that I didn’t cut myself and have to wear gauze on my hand all day like last year.