A couple weekends ago, Ben and I went to Kentucky! There were a few reasons for this trip. The traveling tattoo artist we like (and who did my mermaid and Ben’s rose!) was going to be there, his parents live there AND there is a wigwam hotel just an hour and half from Louisville where we knew we wanted to stay.

Wigwam Village is in Cave City. It is a TEENY town where things close super early on Sundays. Even the dinosaur theme park. So we wandered around, ate ice cream for dinner, and chit chatted. We kept just feeling so lucky to be there! I mean, you walk out of the wigwam and it is so dreamy! And that neon sign! And there were monkey bars to sit on top of and chat in the night. Talk about adventure. 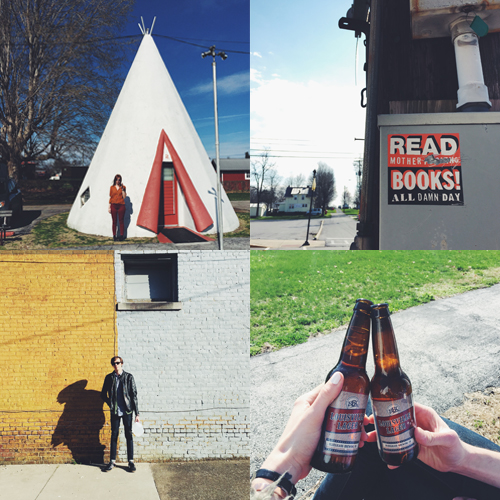 We had Kentucky beers and perused the grocery store where they had Peeps milk? Marshmallow flavored?! Springtime is magic, ya know? Even if the Italian restaurant has hot dogs and is named Turtleini’s and even if the cave tours are sold out.

We headed back to Louisville and got tatoooos! We had awesome crispy-crust pizza with a million-trillion veggies on it, ate snacks at Quill’s and hit the road.

Stopping in Cincinatti was super fun too! They had so many Otis Redding records and we got to have the first picnic of the year. Double the awesome.

The moral of the story is this: You should totally visit Kentucky! There are even fancy KFC’s… if that’s a thing you’re into! If you drive there you should probably  buy moccasins at a firework store on the way home! 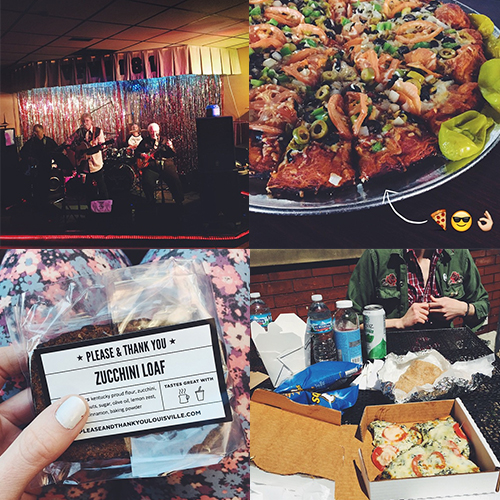 Hey Tiger (… and all the other awesome vintage stores on Bardstown Road.)

And maybe stop in Cincinnati on the way home and eat at Melt.(Peanut wraps AND spinach artichoke pizza melt thing eaten picnic style is kinda magical. Peruse records and magazines at Shake It Records across the street. (They had a ton of Otis Redding Records. Like WHOA.)

5 thoughts on “Let’s go to Kentucky!”