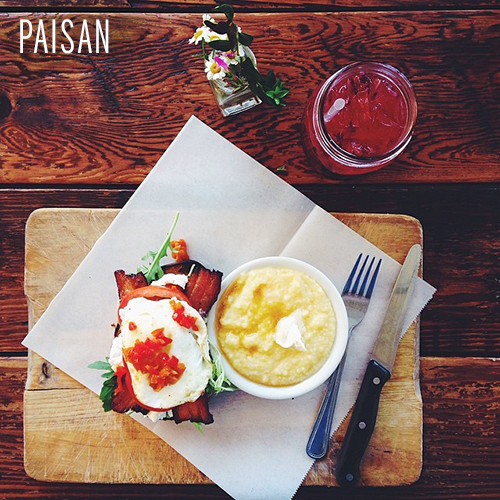 You guys! I went to San Francisco earlier this month to hang with my BFF and work a few days in the SF-based office for the agency I work at. (Is that sentence weird?! You get the idea, right?) Basically, I figured that I’d do a long vacation with a few workdays mixed up in there.  I was pretty excited to get a direct flight landing me there just in time for brunch. We went to Paisan where each of us got a different variety of their bruschetta. I opted for the one with pancetta and a poached egg and hell yeah to the grits with maple syrup and butter, for real. I’m not going to lie though… I felt like I was getting hungrier eating this. Has that ever happened to you? Was this just my vacation hunger? I have no idea, but it was so good and I want to make a bruschetta brunch soon for my favorite people. I totally drank a gin, blackberry, cucumber drink called a Bee’s Knees and it lived up to it’s name even if I let it get a little watered down because I’m a total girl where gin is concerned. 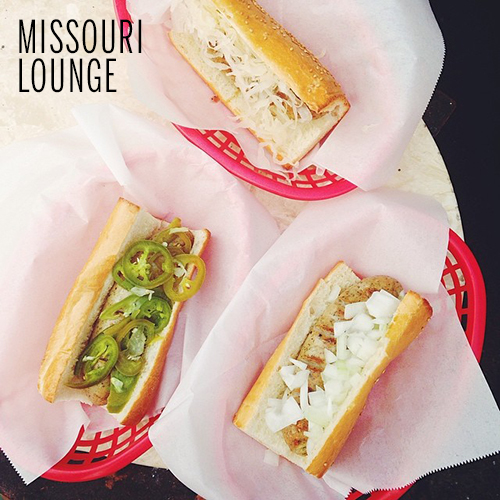 We kept up the day drinking thing and headed to the Missouri Lounge. And Katie was right. It felt like a Detroit bar. It had an awesome back patio where there were so many dogs, and I had to contain myself from petting them all. We got some bratwurst and drank some beers and chit-chatted. The night ended with dreamy fried rice, some ramen, and me almost falling asleep in the noodles based on a few factors like: a late night pre-flight, beers, carbs, but mostly the time change. It was the time change mostly, I bet. I passed out at 8:30. (Don’t judge, that’s 11:30 in Michigan.) 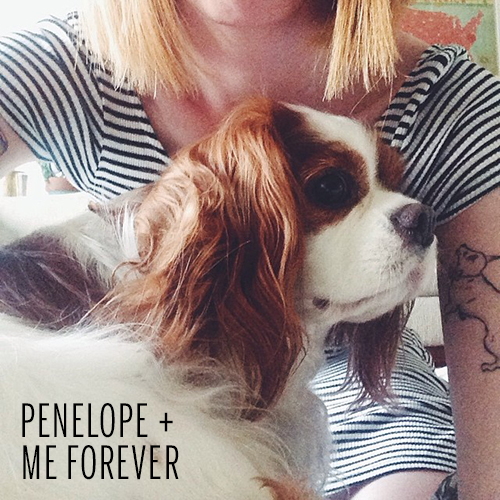 Oh you guys remember Penelope, right? She’s Elliot’s lady friend. Their celebrity couple name is Penelliot. Ringing a bell? Well, I felt good about hanging with her there too. Even if she got sprayed by a skunk and her head smelled quite skunk-y despite looking luxurious and regal. 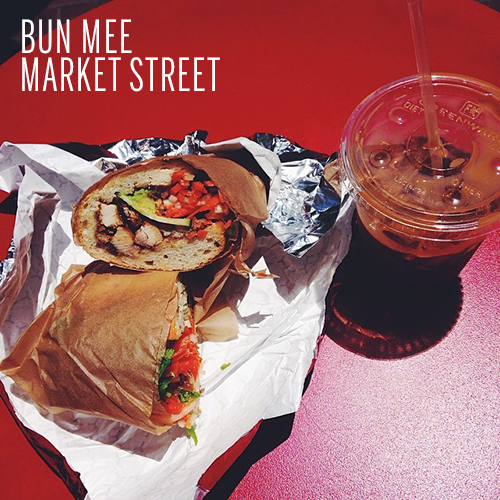 While working, I took a break to go get this Bahn Mi with 5-spice chicken and jalapeños. I totally got a Vietnamese iced coffee and sat outside to eat it independent-lady style. And you know what? I got that same feeling I got in Florida when I sat by the ocean. I was just sitting out there by myself, and so many people were walking by, and it was the busiest street and I felt happy. Being ocean-crunk and busy-city-crunk is a thing. It’s like you’re overwhelmed with how awesome life is! I wanted to compliment everybody lady’s-bathroom-line-style.

P.S. I totally ate the other half of this sandwich as a mid-morning snack secretly at my desk like a real weirdo. I couldn’t bear to waste it, and I was hungry. 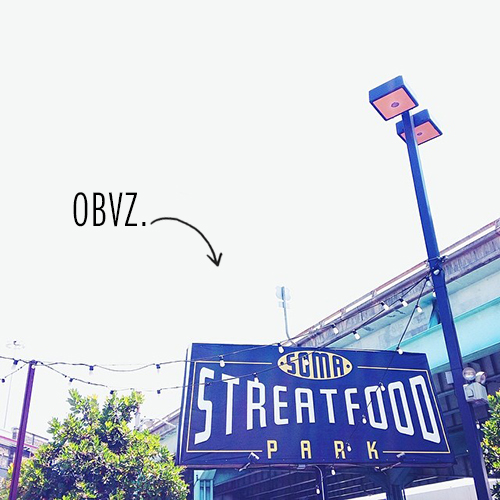 On another fun lunch, my lady friend at the office took me here! I totally got a pork sandwich on fried plantains. It was REALLY good, but not photogenic. Super-good personality, but not cute. Amy got this Burmese tofu salad that I honestly can’t stop thinking about. I took one unforgettable bite of it which caused me to google the hell out of the internet to somehow figure out how to make it… I haven’t found it yet, but if any of you have any idea about how to do this, let me know. It was SO good. We also had some watermelon strawberry sangria that has my heart. Still. 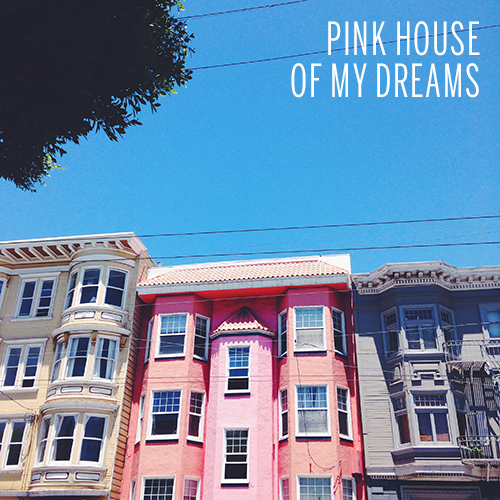 Where’s Uncle Jesse? Where’s Danny Tanner? Where are those kids at? 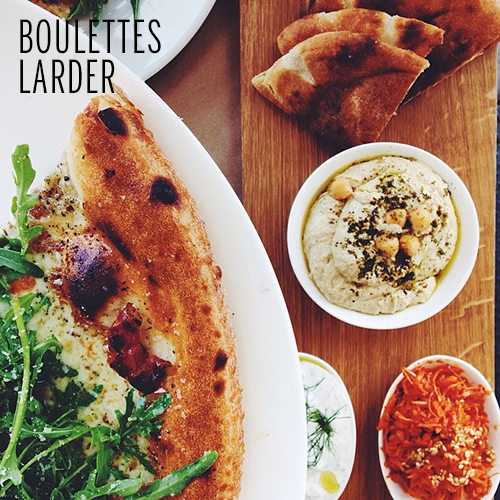 I was lucky enough to meet Tracy Shutterbean on my trip! She said it right in her post when she said “instant friends.” It’s true! Being two girls who appreciate a good carb and cocktail lunch, we went to Boulettes Larder where I had black fig pizza that changed my mind about figs forever. Cindy said it best, when she said that it’s so fun to realize you love a new food somewhere new! We chatted about my Midwest accent and astrology and blogging. Best ever. I wish it could happen weekly! 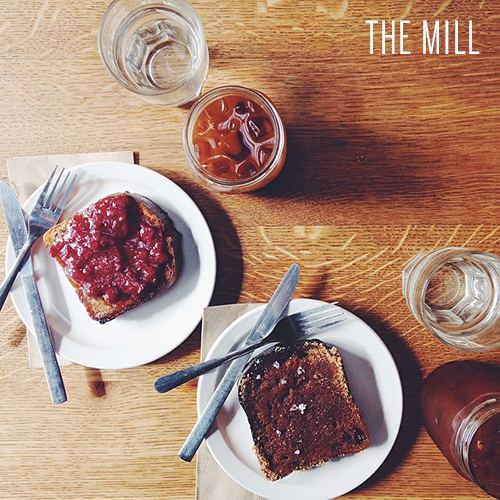 I figured after such a carb-filled lunch, I should eat more carbs in the form of thick $4 toast. Amy got walnut bread with strawberry rhubarb jam and I got cinnamon raisin toast with brown sugar and sea salt. It was SO GOOD. And iced coffee for days. I needed the carbs though, you guys. I had to take a bus, to a train, to a walk. 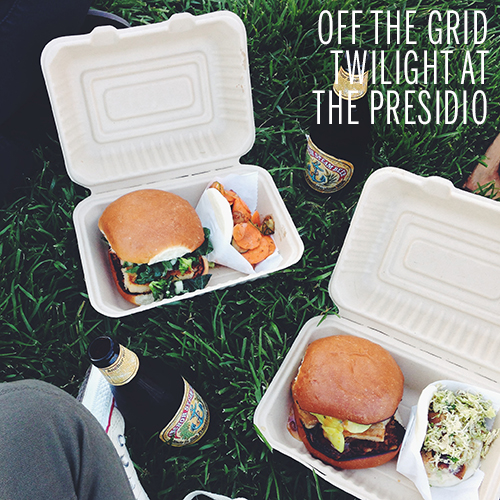 Katie and I went to Off the Grid to eat lobster rolls, only to find that truck was NOT there. We opted for some steamed buns and giant sandwiches, beers, and ice cream to get by. It was pretty cold though. Like, WINDY ocean air and I brought Michigan summer clothes. Needless to say, we ate and drank as much as possible and then headed back to Berkley. 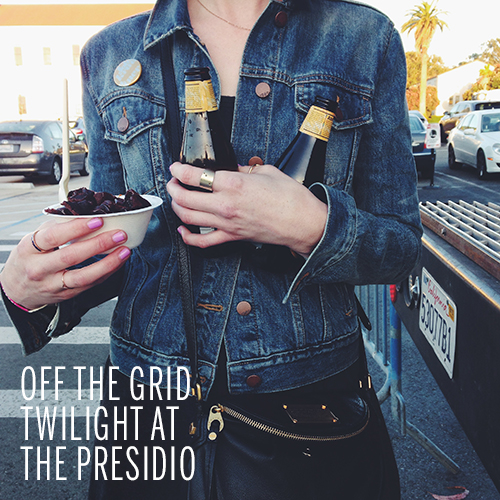 I was not kidding about eating and drinking as much as possible. This sums up my trip a little bit. This sundae was a dream. I opted for chocolate gelato, peanut butter nutter butter gelato, brownies, and hot fudge… just a small sundae on a Thursday. 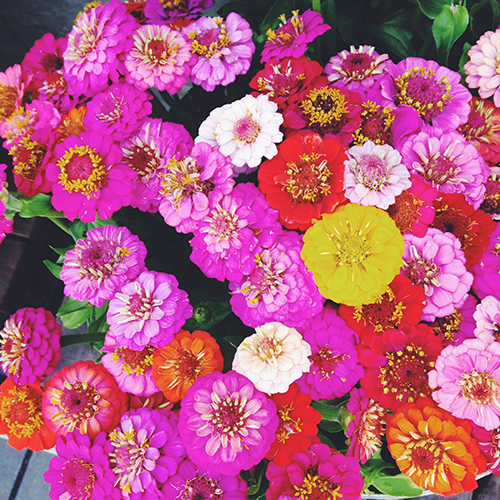 I mean, these flowers, you guys. I wanted to buy flowers at all the stands. There were peonies and dahlias everywhere like it was no big deal. California is pretty casual about being so pretty. 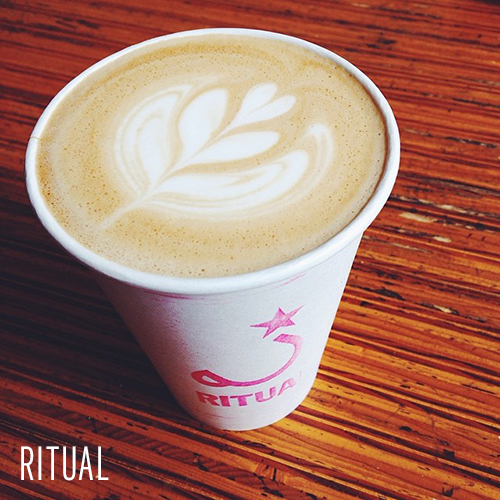 Later on in the week, I explored on my own. I popped over to The Mission to shop around, eat, and hang out. I started out at Ritual for a super pretty latte and to buy coffee. I might need to learn how to make latte art. Hearts on every drink, please. 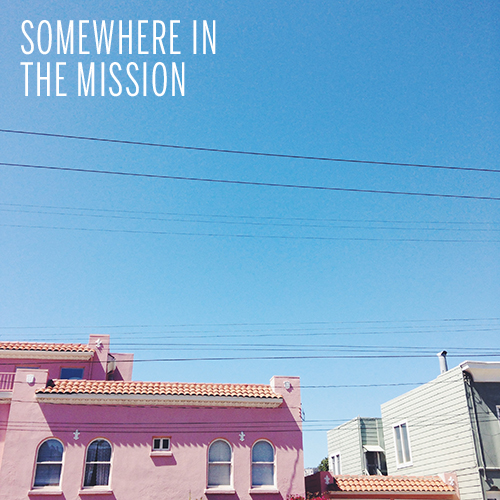 I’m like pink house paparazzi. And the contrast of the orange roof? Cute. 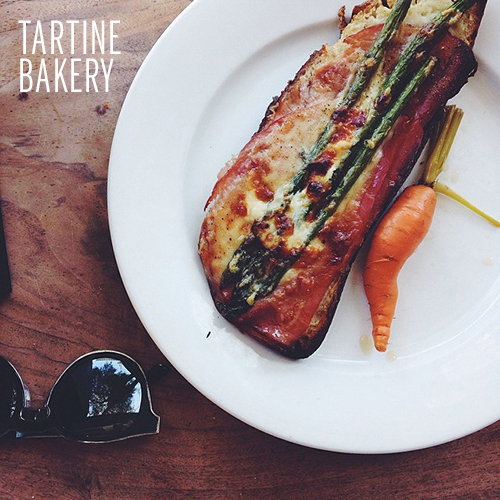 For lunch I popped into Tartine Bakery and got a croque monsieur.  They put asparagus on it and serve it with that petite Dr. Seuss-esque pickled carrot. So thoughtful! Here’s the part where I ordered a morning bun (AKA. giant cinnamon sugar donut) for later and then ate it in the time it took for them to give me this sandwich. Worth it. 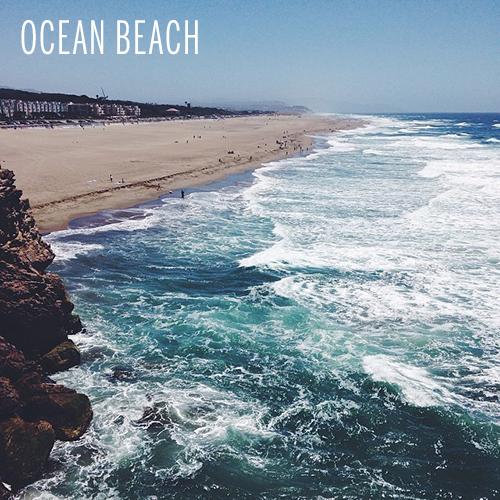 I got done in The Mission sooner thanI thought so I took a Beyonce-esuqe Uber car to Ocean Beach. You see, I’m an Uber amateur so I guess I picked a luxury car. I was ridin’ around town in large black SVU’s exclusively. What a diva! (Total pricy accident. I blame not being able to see my phone screen the sun.)

Anyhow. OCEAN BEACH. I mean, really. Prettiest in the entire world? Maybe? I couldn’t believe it when I was there. I was thinking it’d be cool to tip toe out to the water, but instead looked real weird burning the hell out of my feet on the sand and leaning against the rocky wall to lift my feet up near a dude sun-bather. I then attempted to run back to non-lava (the boardwalk). But mostly, best ever, and so pretty, and I wish I could go there on the regular. 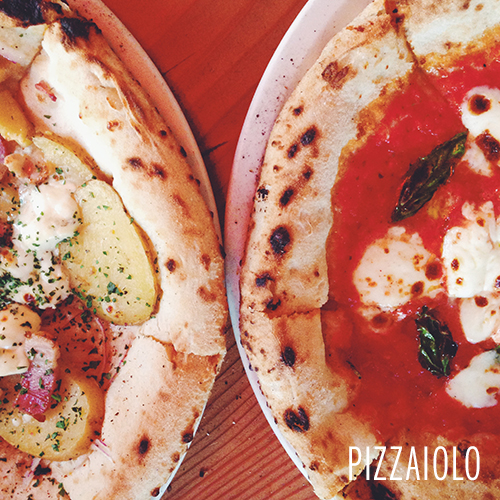 That night, Katie and I went to Pizzaiolo. (I honestly thought they were saying “Pizza Yolo”.) We got the black fig, ricotta, mint, and prosciutto salad situation. (BLACK FIGS, you guys!) And then we opted for the margarita and the potato pizza. It was so good. That crust is perfectly crispy, chewy, thin-ish, dreamy, awesome. We ate the leftovers for breakfast on paper towels and didn’t warm it up because despite my Uber car choices, I’m not really a diva. 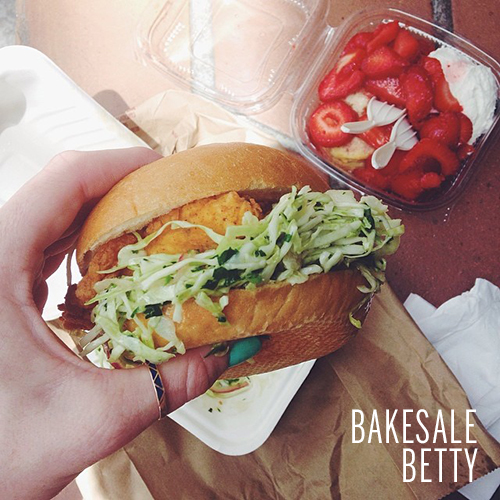 Now let me tell you that this fried chicken sandwich might’ve stolen the show from all the food on my trip. It was just perfect. I keep thinking about how that slaw has super thinly sliced jalapeños in it. It was spot on with the spice level. And that strawberry shortcake was perfect. Kinda my dream lunch right here. 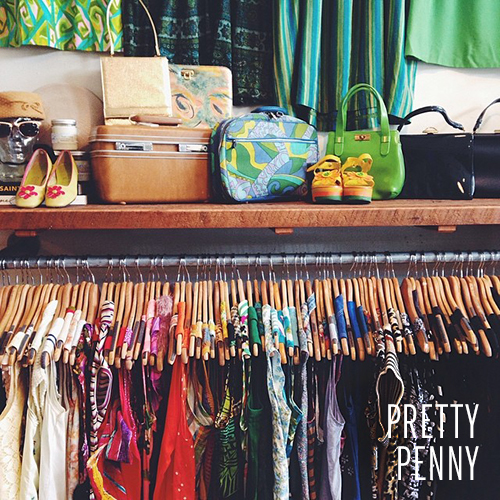 I love a good rainbow of vintage shirts and dresses. I bought a green shirt here that I can’t wait to wear all summer. I’m a sucker for a good crop top, ya know? 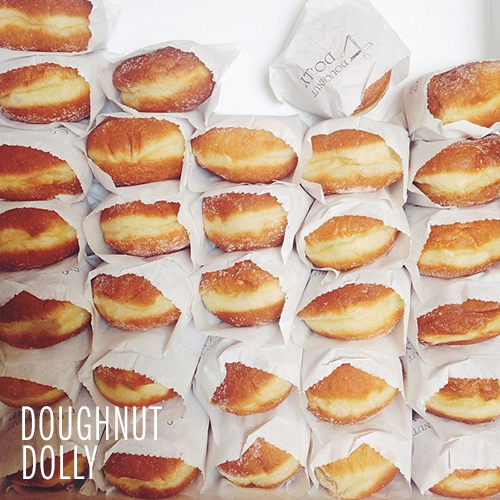 Doughnut Dolly is one smart lady. She has drawers of doughnuts ready to be filled. The fillings of the day were strawberry jam, peanut butter cream, and dark chocolate. We split a strawberry jam one, and oh man. I’m going to make these soon too. I’ve never been a jelly doughnut kind of girl, and now I know that it’s just because I’ve only ever had gross ones before. Because good ones are GOOD. Anyone want to open a doughnut shop with me Detroit-style? Let’s do this. I’m being completely serious. 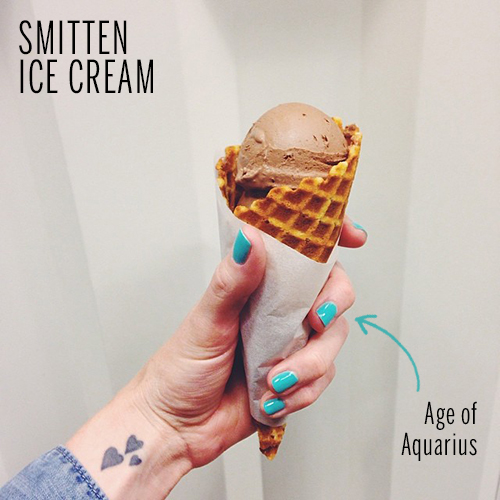 Would you judge me if I said that I ate this ice cream at like 10pm on the fried chicken, donut, day? Can I just tell you that it was the best. AND that waffle cone was the best waffle cone I’ve ever had, and I’ve eaten a few waffle cones in my life. It’s made to order with these crazy inventions that churn and freeze it simultaneously. I might need one of those for at home. Life-changing. 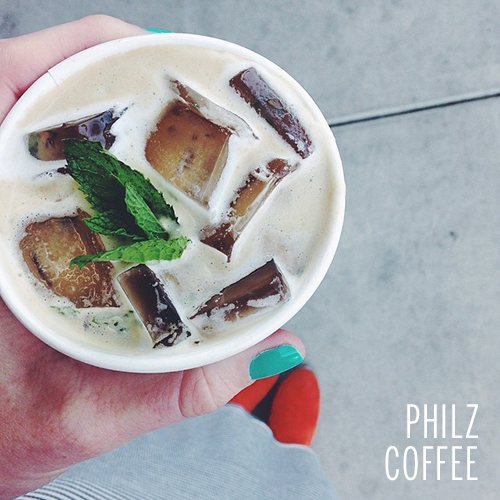 I got this crazy minty mojito iced coffee at Philz Coffee (while eating a cookie in line) and it was ridiculous! So good. Don’t bother having any doubt in your mind, that I have mad plans to make this TODAY. Like for real, today. If it’s dreamy like Phil, I’ll post the recipe next week.

The rest of my visit was full of shopping, lady talk, fancy ginger beer, lobster rolls, bean and cheese burritos with cheese… and beans, root beer, and movie-watching. It was just what I needed! Change of scenery totally makes you ok with your day-to-day scenery again, I think.

P.S. If you want to see what I did, I mean, ate my first time in San Francisco click HERE.