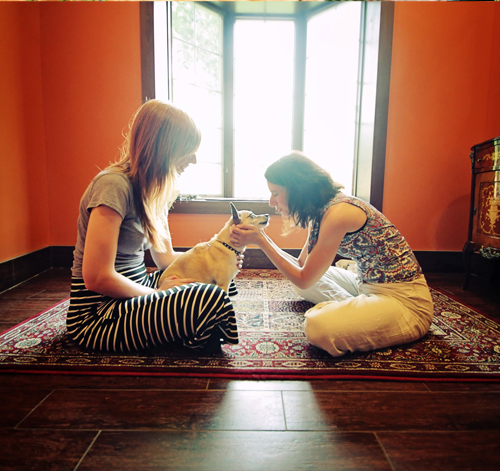 I’ve wanted to talk to you guys about my pup, Elliot, for years! I’ve wanted to tell you all about how he’s had back problems and how they’ve caused trouble with his back legs for awhile. Years ago, Elliot was running in the snow and slid into the fence. He wanted to bark at the angry dogs that lived behind us. That was the beginning of his troubles. At the time he stopped using one of his back legs. Through steroids and rest, he fully recovered. He had another episode where it started with one leg, and then began making the other rear leg have trouble, but through steroids and rest he recovered again. 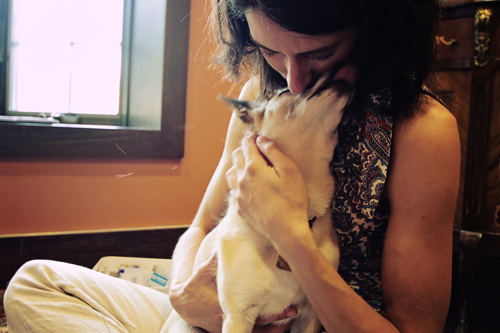 In November 2010, however, it was worse than ever. He was being his normal active self, although he just seemed a bit off. I brought him out before work and he was fine, but when I got home for work (with treats in tow) he wasn’t using either of his back legs at all. It was an old injury at this point, so just jumping on or off a couch could’ve caused it. There’s no way to know what happened. I completely panicked! (Meanwhile, Elliot was happily chewing on a bone I brought him, despite not being able to use his legs. Such a good attitude despite it all!) 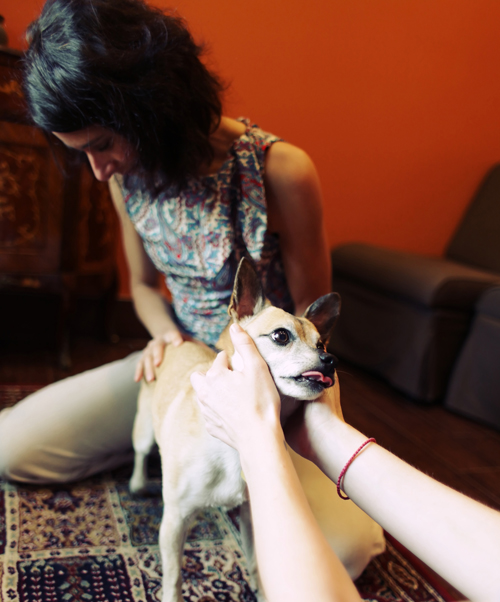 I took him to the vet right away. The only options they gave me were to either take him to the animal neurologist (which I couldn’t afford) or try steroids again. After 5 days, with no improvement, the vet called me and told me that putting him to sleep was an option. After only 5 days! I told him that NO, it wasn’t an option. You see, through all of this Elliot didn’t act upset. He wasn’t acting hurt. He couldn’t feel his back legs, and couldn’t use them, but he was still his sassy, playful self. So we continued with the steroids for a few months… 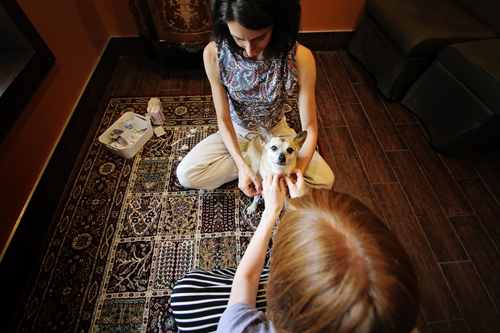 Christmas that year was so hard. I didn’t want to make any cookies, and I didn’t really care that much about any of it. I remember trying to make donuts that morning and I messed up the recipe and opted for pancakes. My little Elliot wasn’t walking so that’s why he’s in his crate hangin’ out in the recap. We always moved his crate all over the apartment to keep him a part of things. He normally follows me around and is totally a part of all I do! I also used to help him run along in the backyard wheelbarrow-race-style. I’d hold onto this little back legs and he’d run on his front legs. And I’m much taller than him so it was a bit tricky, but a good workout! And the little old lady two houses down (that I hadn’t met before) came by to see how Elliot was because she saw us runnin’ around all crazy-like.

(Now it’s February.) I took him to a holistic vet in town for  a second opinion, but didn’t like it. His method of acupuncture involved putting staples in… not exactly what I think of, when I think of holistic. I headed home with a bunch of weird vitamins that I didn’t understand. 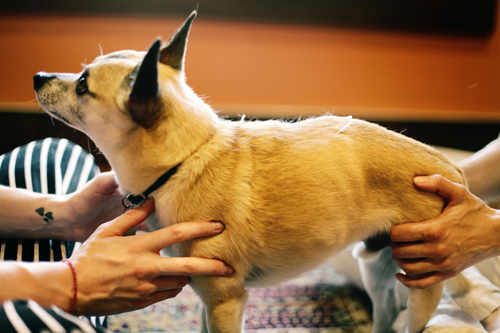 My friend Pam knew what was going on with Elliot. She was there for me through all of it! She mentioned his condition to a customer at her shop, Scout, and they said they knew of a holistic vet nearby! (A different one than the scary staple vet.) And that’s when I finally went to Dr. Nicole LeVeque at Natural Healing Pet Care. She was impressed with Elliot’s motivation to move around her office despite not being able to walk. He pulled himself all over her office, under her desk, and smelled all over looking for crumbs. She mentioned I should get him a cart, but that we’d see how he did after his treatment. I began taking him weekly for acupuncture and the occasional laser treatment, and eventually chiropractic sessions. After his first visit, she said that with the improvement she was seeing that she didn’t think I’d need to get a cart. And within a month he was taking steps! 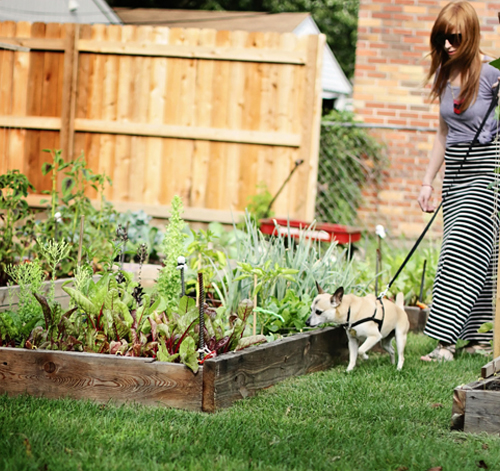 And I’ve been taking him to her ever since! He goes monthly now, and is on herbal supplements. He’s totally a hippie. He  was able to go 2 months between appointments for awhile, but last September he had a flare up and was having a little bit of trouble again. After resting and continuing with treatments he’s doing super good again! He isn’t able to go on stairs or jump on or off of furniture, but he’s super strong now! I’m so lucky to have this little pup! He has remained so happy and positive through all this. And on top of it, Elliot and Dr. Nicole are BFFs. He can’t wait to run into her office and bark for treats.

I just wanted to share this with you guys because when all of this started happening, I didn’t know my options. I didn’t really know anything about holistic medicine, and the choices out there. I would hate for someone else to be going through something similar and not know about alternative medicine. And now look at him! A prancy running fella! 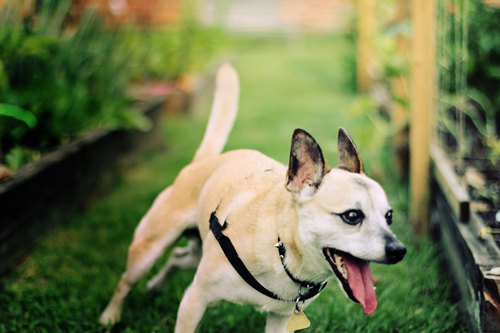 P.S. While my pup was hurt, I was a mess! I barely went out, and when I did I kinda felt guilty for leaving him. I ate pad thai carryout in the living room every Friday night. I’m hoping that this situation has helped me learn how to deal with crisis in the future. You see, I had a hard time focusing on much else! My fella at the time helped out a lot by making dinners and encouraging me to push through and make Christmas cookies despite my grinch-y feelings. I knew I wanted to post about this, but wanted to wait until it was less emotional of a topic. I wanted to wait until I knew my little guy was ok! 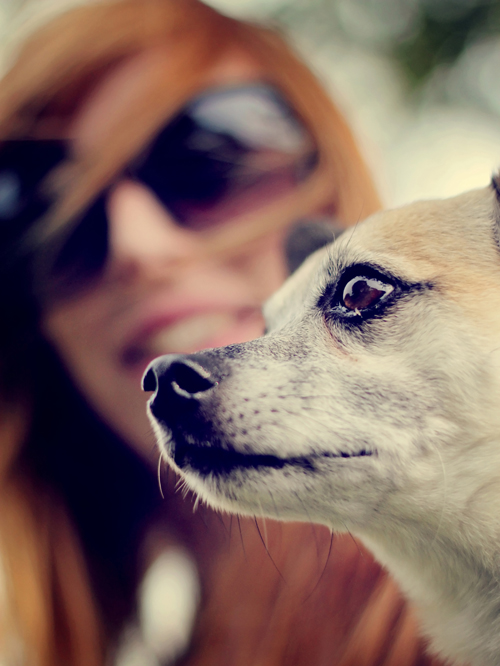 These photos were all taken by Cybelle Codish for an article in Hour Detroit magazine that mentioned Elliot’s vet. To view the article click here or to visit Natural Healing Pet Care’s site, click here.

This post was not sponsored in any way. It’s just something I feel super passionate about, and I wanted to share it! Feel free to share your positive experiences. I’m no holistic medicine expert, I just know what worked for my pup.

39 thoughts on “My Little Holistic Pup”